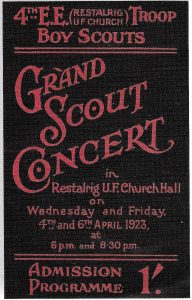 One of the delights of having a watching brief over the increasing archive of Scouting memorabilia held by the Regional Scout Council is that you come across some wonderfully esoteric items, usually at the bottom of a box filled with countless copies of the same books, dried grass and, if really unlucky, the remains of a first aid kit, reeking of iodine! Sometimes these are items that relate to the period before the Second World War, when the Scout movement was engaged in many activities in the creative arts field that might seem a little strange to us today. The notion of Scout Pipe Bands is well known, but in the 1930s there was an Edinburgh Scout Orchestra and choirs were set up for events. Dancing teams took part in 64-some reels at World Jamborees, training on school playing fields!

From the earliest days Scouts were encouraged to perform or to get others to perform on their behalf, both as a means of enjoying themselves and frequently as a fundraiser. There are many early examples of these evenings, with the earliest in our archive being the efforts of the 11th Midlothian (1st Portobello) troop who held a concert in aid of their camp fund at St Anne’s Hall in Tower Street in April 1910 (they had been founded two years before and had already camped at Biel and Heriot). The evening was in two parts, with ‘kinderspiel’ as part one, with accompanists from the local piano-playing ladies. The cast of fairies was, on this occasion, played by females. Three performances were put on, on three different nights, and at each performance there were three different prices of tickets. The result from the log books of the group state a very satisfactory but sadly unspecified total. By 1914 they were known as the 3rd East Edinburgh Troop and were holding a Grand Concert and Display, with Scouts performing a short play which was produced by kind permission of the Editor of the Scout magazine. They invited other Scouts from the locality to join with them. Their guests provided an Indian Club Display and the troop themselves put on a display on ‘the uses of a scout staff’. By 1923 the troop was putting on an evening of entertainment, with the programme priced at one penny and a selection of musical items including ones which state ‘in a varied and vocal entertainment’. Along with recitations, a display of blindfold boxing (!) and sketches were put on, with the obligatory interval where ‘Scouts will sell ice creams’. The following year, Mr Cairns Children’s Choir performed for the troop and the Scouts raised funds to support members attending the Jamboree in London. Also in Portobello, the 4th troop at Restalrig Church had held, in 1920, a Grand Popular Concert, which included a variety of acts, such as the 51st Guides, winners of the Edinburgh Country Dancing Cup, a family of singers, and the Scouts and Cubs themselves. The Cubs put on the Jungle Dance while the Scouts performed a circus act and provided a display of their Indian club work. In 1923 they again held a Grand Concert but added in a special children’s performance for those aged 14 and under, a week before the start of the run of two nights of concerts: a paying audience at your rehearsal run-through!? 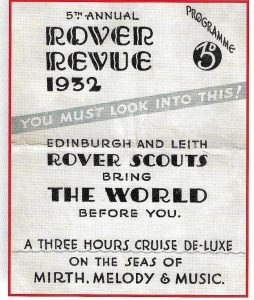 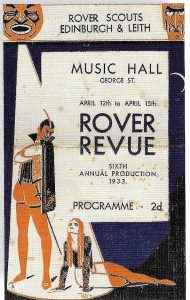 In Colinton the 108th Group presented musical revues, and in 1938 ‘Flying High’ was billed as having ‘full orchestral accompaniment’, presumably not in their Scout hall! Their thanks list included a note thanking six Guide captains for their uniforms! Another early example of cooperation. The 43rd Midlothian in Corstorphine produced a variety show under wartime restrictions billed as ‘The White Knights of 1940’, with proceeds split equally between group funds, the YMCA and the Scottish Coast Mission, showing that we could think of others! In 1938, in the Abbey Church Hall, the 154th Waverley Group put on ‘a modern pantomime of olden days’ as part of their Easter Revels, at which the dancers were provided by the Cub Pack.

1938 was a busy year, as Portobello District put on ‘Pleasure Cruise’, described as a ‘musical and hilariously funny trip round the world’. Unfortunately, I have been unable to trace any reviews! In the 1920s and 1930s the Rover Scouts in Edinburgh put on a series of Rover Revues in the Music Hall in George Street, and in 1934, for their 7th annual production, they ran their revue for a week, with items by Wilcock and Rutherford, who were to provide sketches for Gang Shows in the future. All districts took part, either on stage or, in one case, providing the stage staff. The SS Rover Revue was ‘a mixture of mirth, melody and music’ in 1932, whereas 1933 saw the production of ‘Cinderella a la Moderne’, with Baron Fountain of Bridge and the ugly sisters, Margarine and Vaseline (plus ça change!)

It was, of course, a member of the Rover Scouts, those aged 18 plus who were involved in Scouting, Ralph Reader, who began the great idea of Gang Show while a Holborn Rover. At the time he was beginning his shows in London, the Scouts of Edinburgh were adding to their repertoire, with the 11th Leith holding a concert in their recently opened hall in Sleigh Drive in 1939, with an accordion orchestra as well as Caledonian dancers and members of the troop performing sketches on the themes of ‘camp morning’ and ‘camp evening’. Four months after this concert, war was declared. Scouts continued to be involved in entertainment throughout the war, while Gang Shows moved from just being a Scout show to a wider audience. And the rest, as they say, is history…

Alan was Secretary for Edinburgh Area Scout Council and South East Scotland Scouts from 1978 to 2010..