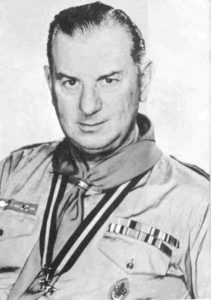 On 25th May, 109 years ago in a little town in Somerset known as Crewkerne, a baby boy was born. That baby boy, 29 years later, was to change the greatest youth movement the world has ever known. Today in 2012 his name, his creation and format lives on with every Gang Show performed across the world.

In 1903, William Henry Ralph Reader was born to William and Emma Reader. Before ‘Ralphie’, as he was known, was nine he was orphaned and was brought up and schooled by various aunts and uncles in Crewkerne, Cardiff and then in a tiny village called Denton near Newhaven. It was in 1914 that Ralph joined the local Scout troop and the church choir and was regularly putting on Scout concerts for various war charities. At 14 he got his first job as a telegraph messenger at the local cement works. When the war ended Ralph was transferred to Northern Ireland and spent a happy seven months working there, and again in his spare time put on concerts just to cheer people up!

Out of the blue one day a letter came from America from an aunt who suggested to Ralph that he might like to try his luck in the United States of America, as she knew various impresarios in New York. He was keen on the theatre and desperately wanted to be on the stage. So he set sail for New York, aged 18, in search of a career in show business, not really knowing what was ahead of him. It turned out that his aunt had exaggerated any contacts she may have been able to give him, and she was simply a dresser’s assistant in occasional off-Broadway productions. However, Ralph took any job he could find whilst attending dancing lessons in his spare time. Whenever theatres on Broadway announced they were holding auditions Ralph would be there, hoping for his big break into show business.

By understudying, spending hours in the dance studio and showing a commitment that was second to none Ralph learned his craft. He started to stage cabaret acts and choreographed dance routines for various shows. His name got around and eventually more work came his way, and by the time he was twenty-four he was sought after as a choreographer on Broadway, with the New York critics christening him ‘The Kid Dance Director’. Variety said, “Reader has conceived the snappiest and most involved ensembles that have found their way to the stage.”

Ralph joined the chorus of ‘Innocent Eyes’ in 1925 and was introduced to an idol of his in an unusual setting. He was in an elevator and an older man said to him, “Are you the young Englishman who is in the show?” Ralph said, “Yes, sir. My name is Ralph Reader.” The man replied, “I’m in the show too. My name is Al Jolson.” At that very moment the pair struck up an immediate lifelong friendship. 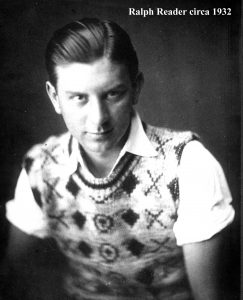 The 1920s were a fascinating time and Ralph was associated with twenty-two American musicals, yet he was keen to return to England for a holiday in 1927. He realised news of his success on Broadway had crossed the Atlantic and so he started going to see the shows that were playing in the West End. He was disappointed. The dancing was slow-paced, dated and lacking the spark that he had been used to in New York. Ralph returned to America and continued to produce more musicals until he decided in mid-1928 to go back to England to live permanently.

Now in London, Ralph started to choreograph and direct shows, and occasionally star in musicals. Two of the hits of the late 1920s were ‘Virginia’ and ‘Good News’. The show ‘Good News’ was to be the catalyst for Ralph’s return to Scouting. Hayden Dimmock, who was the editor of The Scout, had recently seen ‘Good News’. He wrote to Ralph asking if he was the same Ralph Reader who had written to The Scout many years earlier. Of course, it was, so Hayden introduced Ralph to the Holborn Rovers and right away Ralph’s enthusiasm for Scouting was back. The Holborn Rovers put on concerts, and Ralph gave advice and helped out with these shows, as well as going off to camp on any free weekend.

But as we know, it was in 1932 that his life was to change when he wrote the words and music and produced ‘The Gang’s All Here’. Little did he know the impact that the Gang Show would have on his life. While the Gang Shows grew in popularity, Ralph continued working professionally in the theatre, including staging the Ivor Novello extravaganzas at the Theatre Royal, Drury Lane. These shows included ‘Glamorous Night’ in 1935, ‘Careless Rapture’ in 1936 and ‘Crest of a Wave’ in 1937, the latter having nothing to do with Ralph’s most famous song, however! Over at the London Hippodrome Ralph staged ‘The Fleet’s Lit Up’, ‘Yes Madam’ and ‘Please Teacher’. He also appeared in various musical films including ‘Limelight’, ‘Splinters in the Air’, ‘The Gang Show’, ‘Derby Day’. He was a busy man yet still found to time to devote to Scouting. In 1936 Ralph undertook his greatest challenge to date when he produced ‘Boy Scout’. This was no Gang Show – it was a musical pageant and was staged at the Royal Albert Hall. It had a cast of a thousand Scouts and was re-staged at various points in the 1940s and 1950s. It was at a performance of ‘Boy Scout’ that Lord Somers presented Ralph with the Silver Wolf, the highest award in Scouting.

War was declared in 1939 and Ralph began a new career in the RAF as an intelligence officer. Ralph’s new career as a spy meant he had to travel extensively, so the RAF Gang Show, as well as being a great morale booster for the troops, was a perfect cover for Ralph’s activities in intelligence. In his autobiography, Ralph told the story of one young airman who was keen to join an RAF Gang Show unit and, when asked, told Ralph that he could play the drums. Ralph asked him if there was anything else he could do, to which he replied, “Well, I can do impersonations.” He was told to attend an audition the next morning. When Ralph arrived at the appointed time he heard ‘himself’ singing ‘We’re Riding Along on the Crest of a Wave’. Ralph walked onto the stage behind the impersonator and to the surprise of the other airmen who were watching ‘Ralph’, he went right up to him face-to-face, at which point the airman stopped singing abruptly and nervously saluted Squadron Leader Reader, saying, “Sir, do I get ‘jankers’ or are you thirsty?” Ralph burst out laughing and so they enjoyed a drink together. The young airman was Peter Sellers, who went onto achieve international fame in TV and film. In 1943, Ralph was awarded the MBE of the Military Division in recognition of his excellent service.

Ralph was respected for his ability to work with vast crowds and so he produced the first Royal British Legion ‘Festival of Remembrance’ at the Royal Albert Hall in 1944. He produced this for many years, along with many other similar pageants, including ‘Battle for Freedom’, ‘Per Ardua Ad Astra, and ‘Wings’. After the war Ralph continued to work extensively, taking on new challenges wherever and whenever they came along. While he was known as Mr Gang Show he gave more to Scouting than many realised. Ralph was a Rover Leader, a Commissioner for London Rovers, a Scoutmaster for the 10th Holborn and Assistant County Commissioner for London. He ran a Sea Scout Group, the 20th Holborn, and in 1957 was appointed a Chief Scout’s Commissioner by Lord Rowallan.

All this and he was kept busy in his show business career. He wrote many plays which were often performed at the other end of the year from the Gang Show, including ‘Great Oaks’, ‘The Road to Where?’, ‘The Wingate Patrol’ and ‘The Story of Mike’. In 1959, Ralph Reader MBE added CBE to his many titles in recognition of his service to Scouting and yet he showed no sign of slowing down. He was a regular visitor to Gang Shows all over the country, he was guest speaker at conferences and meetings, he wrote endless articles for various magazines. His energy was amazing! Ralph was the subject of ‘This is Your Life’ in 1964. This programme allowed many of Ralph’s friends and colleagues from the world of Scouting and show business to pay tribute to him.

In 1974, Ralph released ‘Ralph Reader Remembers’, which summed up his long, varied life. It was also the year when he retired from producing the Gang Show. He kept up his interest by inaugurating the London Gang Show Fellowship, which allowed members of Gang Show to keep in contact and this still exists today.

In 1975, the World Scout Bureau awarded Ralph the Bronze Wolf, which is the highest award that World Scouting can bestow upon an individual. In all, Ralph was associated with 22 Broadway shows, 34 West End productions, and 140 productions at the Royal Albert Hall. He worked with the greatest names in theatre: Noel Coward, Gertrude Lawrence, Ivor Novello, Laurence Olivier, Marlene Dietrich, Margot Fonteyn, to name a few. He appeared in four Royal Command Performances, he was a regular on radio and TV, and released many records. He was a Scout.

This is just a short snapshot of the great life of Ralph Reader MBE, CBE, There just simply isn’t enough room available!  It is impossible to know exactly just how much money has been raised for Scouting and Girlguiding through Gang Shows but it must be millions! One thing that Ralph insisted on was that his material would be available for use completely free of charge. He could have made his money – but his riches came in other ways.

He closed his autobiography with the final words to his song, which he sang at the end of the Farewell London Gang Show in 1974: “I wouldn’t change for a man with a million for I’ve had a million blessings more.”