These are the times

It is often said that ‘every night of every year somewhere in the world a Gang Show is playing’. Maybe not quite 100% accurate, but that bold statement is not too far from the truth. The Gang Show has now been part of life in the UK and beyond for nearly 90 years, and its reach is well known and loved but, like everything, it had a beginning. 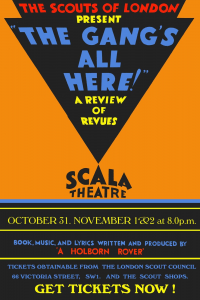 s a distraction to his busy and successful career as an actor, producer and choreographer. The young man was Ralph Reader, and he soon found himself involved with the Holborn Rovers.

In early 1932 Ralph was approached by the formidable County Commissioner, Admiral Philpotts, who asked if he would put on a concert to raise money for a swimming pool at the local campsite, Downe. Ralph agreed, with some conditions. His name was not to be associated with the production and it was to be different from any other concert staged by Scouts at that time – it was to be a ‘show’. Ralph met his pal Fred Hurll and between them they decided they would have a cast of 100 Scouts from across London, and that Ralph would write all the words and music and produce the show.

All the arrangements were made and on 25th May 1932, Ralph’s 29th birthday, the cast were together for the first rehearsal. Ralph made it quite clear to everyone assembled that they were all equal. If someone got a line to say in a sketch or a solo line to sing then they were lucky. There were to be no stars in his show – they were Scouts first and foremost.

The Scala Theatre was booked for a three-night run and the cast began rehearsals. However, one thing that troubled Ralph was what to call the show. It was in a break at a rehearsal that a single phrase changed Scouting and the theatre forever. Ralph was in the Drill Hall while the cast were on a break and he called everyone back in. After a minute or so he said to a youngster, “Is everyone back, son?” and the youngster cheekily replied “Aye, aye Skip – the Gang’s all here!” It hit Ralph and he knew that’s what the show had to be called. They were a Gang – and so began the Gang Show legend.

Throughout the dress rehearsal the cast were in various costumes, but Ralph had decided to make the point in the last number of the show that everyone should be in their Scout uniform. Ralph watched the finale and realised that everyone was wearing their own troop scarves. He, in a moment of inspiration, turned to the wardrobe mistress and said, ‘I want you to go and get material, make it red material, and make 100 new scarves for the opening performance tomorrow night.’ And so she did.

On 30th October 1932 ‘The Gang’s All Here’ opened to a half empty auditorium. It ran for three performances, but the spirit was sky high and a swimming pool was purchased for Downe. This was a show that was different. There was a pace about it. The music was punchy, the sketches funny and the cast were all Boy Scouts.

Following the success of that first show, and encouraged by Baden-Powell, ‘The Gang Comes Back!’ appeared at The Scala in 1933. By 1934 people were calling the shows simply ‘The Gang Show’. Scouts across the country became aware of this London phenomenon so they got permission to take the format and material to reproduce in their local area. Stoke, Newcastle and Glasgow were all early shows appearing in the mid-1930s. Ralph gave all his material free of charge – an early sign of his generosity.

By 1937 the Gang Show was a regular feature on London’s stage and the greatest honour was bestowed upon them when they were invited to appear in the Royal Command Performance, becoming the first amateurs to do so. 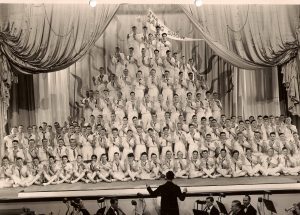 This was a special year, as a feature film was released by film producer Herbert Wilcox. The film was loosely based on the creation of the Gang Show and starred Ralph as a showman Boy Scout Leader. The film, which featured the hit routine ‘Crest of a Wave’ had its world premiere on 13 April 1937 at the Lyceum Theatre in London and was an instant box office hit across the UK.

By 1938 the Gang tried a new direction with a musical play called ‘Great Days’. This was a great success but it was decided to return to the revue format in 1939. Sadly, although rehearsals had started it was never performed, as the dark clouds of war were looming.

After war was declared Ralph joined the RAF and soon found a new role in which his spirited character could be best employed. Air Commodore Archie Boyle, Director of Intelligence of the Royal Air Force and an original Gang Show committee member told Ralph to choose 10 Scouts from the Gang Show and form an RAF Gang Show unit. And so began a new chapter of the Gang Show story.

The RAF Gang Show unit soon had airmen lining up to audition for this unique concert party. RAF Gang Shows performed all over the world, entertaining the troops in very difficult circumstances. Names that performed with the RAF Gang Shows include Peter Sellers, Tony Hancock, Dick Emery and there were many more who became famous entertainers and comedians after their war service.

On return to civvy street, Ralph formed Ralph Reader Ltd and toured the country both with the RAF Gang Show and his own productions of various operettas and musicals, packing theatres up and down the country, including many shows at the Edinburgh Empire and King’s Theatre. But by the late 1940s Scouting was calling him back and Gang Shows were starting to reappear again across the country. 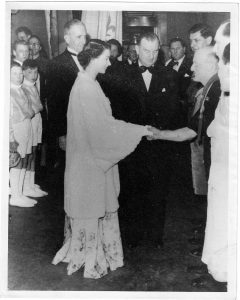 Ralph decided to bring back the London Gang Show and so the King’s Theatre, Hammersmith was booked, and in 1950 The Gang Show returned. It was as though they had never been away!

Throughout the 1950s and 60s the Gang Show flourished, becoming a regular feature on TV schedules. They released records and an album of music from each year’s show was published, allowing other Gangs to perform Ralph’s great numbers. It was quite amazing that London Scouts mixed quite comfortably with the likes of Marlene Dietrich, Vera Lynn, Max Bygraves and many more stars of the stage and screen. 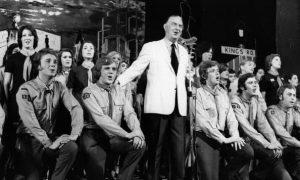 The Gang appeared in two more Royal Variety Performances in the 1960s, proving that even royalty loved the Gang Show spirit. Her Majesty The Queen attended the 40th anniversary production in 1972, which was specially filmed by the BBC.

By 1974, Ralph, now in his 70s, had decided it was time to retire so he announced the ‘Farewell London Gang Show’ as he wanted to go out on ‘the crest of a wave’. The show ran for two weeks at the Gaumont State Theatre, Kilburn – and what a show it was. Many of the Edinburgh Gang were there for that special, emotional last performance.

In his retirement Ralph visited Gang Shows up and down the country and occasionally wrote new material. Ralph was a guest in Edinburgh in 1978 and for our 21st show in 1980, and many people still involved with our show remember the great times when Ralph was in Auld Reekie.

In March 1982 Ralph was the guest of honour at a dinner in London to celebrate 50 years of Gang Show. Throughout the evening there were various tributes to Ralph, including one given by our own Harry Dougan. It was at this dinner that many felt they were saying goodbye to Ralph and it was also at this he gave his final address. He thanked all present for a terrific life and he made a wish that the Gang Show spirit would live forever by saying “…I’m going to leave you now with a wish. A wish to everybody who has ever worn a Red Scarf…May all your years, your months, your weeks, your days, even your hours. May every one of your hours find you Riding Along on the Crest of a Wave.”

Ralph died just a few weeks later but his legacy is, of course, the Gang Show, and shows continue to be performed all over the world. Edinburgh is proud to be part of this great, great game –We’ve Got a Lot To Be Thankful For.